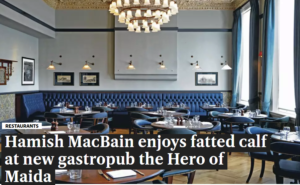 Guest reviewing in The Evening Standard this week was Hamish MacBain, who reviewed the resurrected gastropub The Hero of Maida (8/10). Formerly The Truscott Arms, it was saved following a community campaign, and now (headed up by Henry Harris of “much-missed restaurant Racine”) has “an overwhelming air of much-more-poshness” than its predecessor.

The “menu follows suit” with “French-influenced fare” replacing the gastropub grub, served up in portions “substantial enough not to require augmentation” (posh talk for ‘big’). It’s not great news for calves, though, with both their brains and liver on the menu, but they tasted “pretty wonderful” served up with the “sort of smooth mashed potato that is really just showing off”. 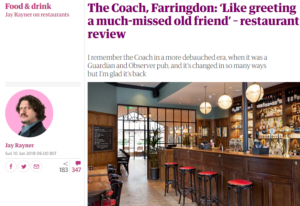 There was more Henry Harris adulation when a nostalgic Jay Rayner in The Observer paid a sort-of-return visit to The Coach in Farringdon; in former days – or what Jay calls “a more debauched era” – it was called The Coach & Horses, and was “a Guardian and Observer pub”, right behind the newspaper offices, and a regular haunt of their journalists.

Harris has taken over this venerable boozer and turned it into a proper gastropub, complete with many Racine favourites: “the menu at the Coach is like greeting a much-missed old friend”. In fact, Jay admits up front that Harris is indeed a friend of his, and couldn’t have reviewed unless he could be positive.

And positive he is: “Harris’s French classics are like nursery food, a list of things that says everything will be fine” – steak tartare is “a loose mound of mustardy loveliness”, grilled rabbit “with planks of crisp, smoked bacon”… is “extremely satisfying” and prices are “London familiar”.

Many changes have been made to the pub Jay once knew and loved (apart from the location of the toilets, which pleased our reporter immensely); “it’s changed in so many ways but I’m glad it’s back”. 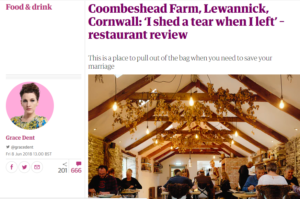 A breathless Grace Dent in The Guardian asserts that “heaven would look and feel a lot like one neverending overnight stay at Coombeshead Farm in north Cornwall” – her score (highest yet for the second week running) was 29/30.

Her entire review is one long love letter to Tom Adams (of Pitt Cue Co fame) and NYC-chef April Bloomfield’s new-ish farm-to-table guesthouse, which she calls “a self-sufficient, gaspingly tasteful, food-forward, wunderkind-chef-led passion project set in 60 acres of rolling, remote British rural splendour” – and even claims it’s the “place to pull out of the bag when you need to save your marriage”.

The food, from “exemplary sourdough” to “faultless green asparagus made devilish with brown butter”, through to a main event of Waterloo Farm lamb with wild garlic” and adorable breakfasts makes “the real world… feel cold, unkempt and distinctly non-heavenly”.

Grace was so rapturous in her praise that she recalls ” shedding a bizarre and quite unexpected involuntary tear when I left”. Or was it all too perfect? “the more I think about it, I’m not entirely sure that Tom Adams hasn’t started a cult”. Praise indeed. 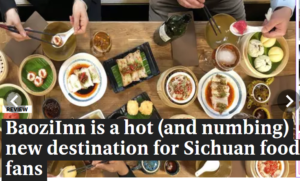 Regular Evening Standard reviewer Ben Norum visited the new and improved BaoziInn (****) from the owners of super-spicy Sichuan joint Barshu across the road; “instead of focusing almost exclusively on Sichuan and Hunanese food, it now offers Cantonese dim sum with just a touch of inspiration from those fiery flavours”.

BaoziInn’s dim sum are “excellent” – “wontons burst at the bite to release a hit of pure unadulterated flavour” and “dan dan noodles – slurping permitted – [are] spicy and richly flavoured “.

The menu update at BaoziInn is “no bad thing”, Ben says. “If nothing else, it can give your tongue a rest from the numbing thrill of Sichuan peppercorns between dishes.” 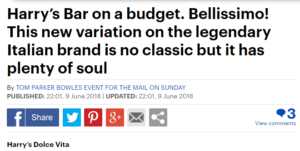 Tom Parker Bowles in The Daily Mail paid a visit to Harry’s Dolce Vita, the “cheaper, more accessible version” of Venice’s Harry’s Bar (and London’s for that matter), “a canelli’s throw from the back door of Harrods”. The trademark TPB “been there, done that” name-drop count is reliably high – Venice, Naples, Assaggi…

The room at Dolce Vita has “real charm”, the “culatello [aged salami] is good quality” and the carpaccio is “decent quality” but the clam linguine is “dull”. Overall, it’s “no classic, sure, but certainly no dud” and a “fantastic place to linger and gas and gossip” – expect a roll-out in a quaint market town near you soon, a la Ivy Cafe.

The Telegraph’s Kathryn Flett became an (unwilling?) expert on Dorking when she visited newly opened Salt Pig in the Surrey Hills town (***): she described the family-run spot as “clearly ambitious and rather pleased with itself” where “pork features heavily on the menu, for no apparently obvious reason” but approved of the food, which included a pie “so traditionally gorgeous it… looked like a 17th-century still life” that was served with “a fist-bumper of a sauce”.

Megan Townsend for The Independent brunched at Kettner’s Townhouse, which has been “the worst kept secret of Soho’s rich and famous for centuries”. “Despite the crystalline, luxurious baroque interior,” it’s “so affordable” and full of “families and friends enjoying” the ‘weekend lunch’ fare.