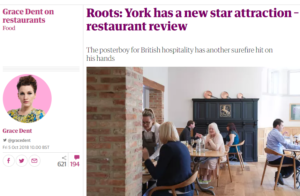 Grace Dent paid a visit to York for The Guardian, and the new restaurant from Tommy Banks, “posterboy for British hospitality”, winner of The Great British Menu and chef-patron at the much-loved Black Swan at Oldstead. She declares Roots, in a vast converted Victorian pub York’s “new star attraction” – better even than the Jorvik Viking Centre…

It’s a Banks family affair, with Tommy’s brother James serving as the “wonderful, personable… front-of-house”. The size of the new place gives them freedom to “geek out even more intensely on seasonality” – , and the entire service “with a Noma-esque swagger”, is divided into three distinct times of the year: Preserving Season, Time of Abundance and The Hunger Gap.

Unusual ingredient combinations abound (“more hits than near misses”), such as turbot with cream and strawberries (“so very wrong that it tricks the tastebuds into it being 100% right again”) and cured trout with fennel kimchi (“delightful”). But, it all worked, and was “one of the loveliest lunches of 2018”.

Remember to leave room for pudding: “in fact, go speedily to pudding if your appetite is meagre”, for the likes of roasted rye and carrot caramel shortbread, which “looks like a trifle” and tastes like “Christmas distilled”. (27/30) 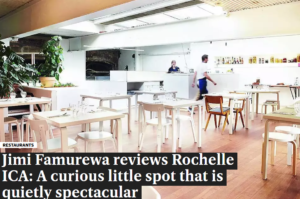 Rochelle Canteen at The ICA

Jimi Fanuwera for The Evening Standard visited Rochelle Canteen at the ICA, a “proper grown-up kitchen operating out of an art gallery”, and the big sister of Melanie Arnold and Margot Henderson’s converted-bike-sheds restaurant in Spitalifields.

The “sky-lit dining space” of the mezzanine restaurant (found through the gift shop, cinema and exhibition spaces) has a “whitewashed ruggedness to the design” and an equally simple menu focused on seasonal British food – often just “two or three appealing things on a plate”. There’s also “trotter prints all over the menu” – Margot is married to Fergus, of “temple to piggy delight” St John, after all.

Even better, “the reasonableness of the bill induced pleasant surprise rather than thin-smiled disbelief”, making Rochelle’s central London spot “one of the more quietly spectacular places to eat right now”. (8/10) 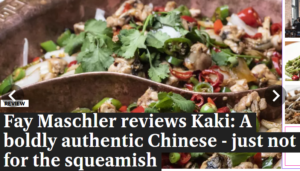 Hot on the heels of Giles Coren’s ‘discovery’ just last week, Fay Maschler for The Evening Standard visited Kaki three times in order to get a handle on the place – the “huge” portions and unrelenting language barrier didn’t help (but translated Google reviews did).

Much like The Times’ critic, Fay enjoyed the “hallucinatory” sea bass in hot chilli oil, the tofu with preserved egg and braised trotters; less so the “utilitarian style” and “peremptory service”. Either way, not for the squeamish. (***) 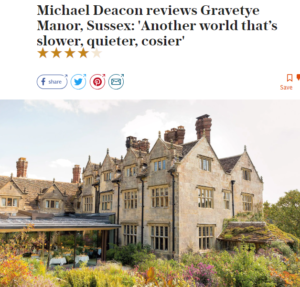 Micheal Deacon in The Telegraph enjoyed a step back in time at the 16th century Gravetye Manor, which opened a new restaurant space in early 2018: it’s in “another world that’s slower, quieter, cosier” altogether. (****)

Kathryn Flett for The Telegraph visited James Cochran’s latest opening, 1251 in Islington; apparently named for a song by The Strokes” (but possibly also something to do with the fact that Cochran is not free to use his name while it’s still connected with his previous establishment in EC3).

While admitting she was in a judgmental mood, Ms Dent disliked the “absurd little sliver of a room” from the start, in a room that’s “ in desperate need of a revamp”. She described the service as “perkily upbeat and distractingly chatty”, and the menu as “still stuck in that tediously tricksy-millennial rut of fussy sharing plates and hard-to-fathom course descriptors”.

You can sample Cochran’s Great British Menu-winning main course from the NHS 70th anniversary meal, now re-named, inventively, as “Great British Menu Goat”, but Grace plumped for a series of Snacks and Plates, from which the Kent pork with blood pudding and turnip kimchi was “spectacular”, a “a nom-nom Insta-stunner on the plate”.

But overall? 1251 is “neither one thing nor the other. I can’t help feeling it was opened very speedily to capitalise on Cochran’s Great British Menu exposure”. 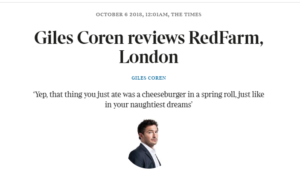 When Giles Coren (for The Times) went to “cult New York dim sum venue” Red Farm’s new London outpost, he thought he was in the wrong place – the “lots of glossy pine, red and white check upholstery, bright lighting” and “very jolly” ambience were not what he was expecting at all. (The owner, who appears to have stayed with Giles throughout the meal, explained that it was “American country style”, that would be instantly recognisable to New York’s diners.)

He enjoyed the soup dumplings, the cheeseburger in a spring roll (“just like in your naughtiest dreams”) and the Pac-Man dumplings, followed by  some very, very good barbecue baby back pork ribs”. (8/10) 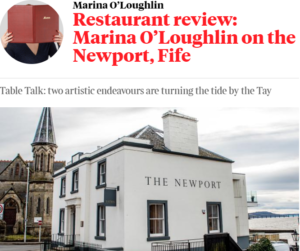 Marina O’Loughlin was goaded into a visit to Jamie Scott’s Tay-side restaurant by a tweet from the chef himself. Her Sunday Times review found a “gently quirky” establishment, and a restaurant dominated by a“vast picture window, framing a mesmerising view of the Tay Bridge”.

Local produce is central, but the “impression is of a chef who gets out of his kitchen, who travels and eats and absorbs”. There’s “delicacy and lightness”, but robust, “butch” flavours too: all “plate-lickingly lovely. Scott clearly likes playing with textural contrast”. “Clever, intricate desserts” follow, and a humble admission that maybe things like MasterChef: The Professionals (which Scott won in 2014) do matter, and that “being metropolitan and elite” needs to stay in London. 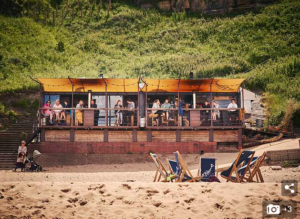 After Tom Parker Bowles’ recent jaunt to the North East, it was only a matter of time before a review of Riley’s Fish Shack appeared in The Daily Mail, following a path to Tynemouth that’s well-trodden by his peers.

After discovering that Tynemouth isn’t, after all, full of “abandoned shipyards, out-of-work greyhounds and grim North Sea gloom”, he ventured down the cliff to Riley’s, “a simple, unassuming sort of place that happens to serve up some of the best fish I’ve eaten anywhere”; a spot that wouldn’t be out of place in many other countries, but is “rare as hell” here.

The “best of that day’s catch” is served up “precisely cooked. With a view you can devour.” At decent prices, too. “You get the feeling that anything this kitchen touches turns into piscine gold.” (*****)

In The FT, Nicholas Lander reviewed Kerridge’s Bar & Grill: “the kind of warmth and service that could be described as smart pub”