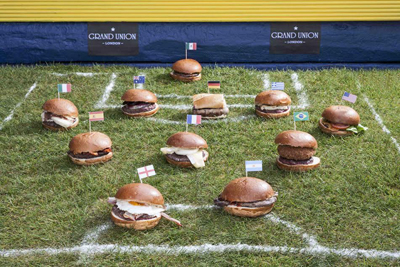 Yes, it really has been four years since South Africa hosted the World Cup and we all discovered what a vuvuzela was. Now it’s the turn of Brazil. If, like most of us, you’re not planning to make the long trip to South America, never fear, there is still plenty of footy (and foodie) fun going on at home…

Far from the madding crowds

In honour of the World Cup the Ivy-et-al group has decked out all its private rooms with TV screens. Football fans can watch the game while dining in venues from Mayfair (Scott’s and 34’s Emin Room), to the newly refurbished Daphne’s conservatory in South Kensington and the West End (Bam-Bou, Balthazar and The Ivy) to the Rivington Grill in Greenwich or Shoreditch. Caprice Group can accommodate groups from eight to 60 for sit-down meals and up to 120 for drinks and canapés.

Or why not book a table at Anise, Cinnamon Kitchen’s chic cocktail bar, and enjoy the beautiful game in style? Open until 1.30am Monday-Saturday, Anise will be showing all the late matches. For select games, including England matches, the Chef’s Table at Cinnamon Kitchen is available for private hire.

It has always been a unique concept (hotdogs and champagne), now this Fitzrovia dude food haven has added a few new items to their menu – albeit ones that still star frankfurters. From now until the end of the World Cup, Bubbledogs will introduce 10 limited edition hotdogs with toppings representing different nations. For those supporting England there’s the ‘Breakie Dog’ (crispy bacon, tomato relish, black pudding bits and a whole fried egg).

In honour of England’s departure for Brazil these Mexican restaurants have introduced a pun-tastic way for fans to support their team: eating a Roy Hodgson inspired bur-ROY-to. The limited-edition burrito is filled with roast pork, crackling and apple sauce salsa. Benito’s Hat will keep the bur-ROY-to in play as long as England are – better get them in quickly then!

For pop-up cool in north London

While they are fitting out their new home in Islington’s Upper Street, pop-up-turned-permanent restaurant United Ramen will host a final temporary hurrah at House of Wolf. With influences from countries taking part in the World Cup, including Korea, USA and Japan, the pop-up series will be held 25-27 June.

France vs Brazil, always an exciting showdown on the football pitch, now the two countries collide at this Brazilian pop-up by French bistro Oui Madame. Brazilian and French finger food will be served alongside cocktails and, of course, the World Cup matches will be screened.

For the more traditional route

If you don’t want to miss any of the action during this year’s World Cup then this chain of gastroboozers is the place to be. Footie fans are not only catered for with enormous indoor and outdoor screens, but there are also private Thai beach huts for hire at some Grand Union outposts. The restaurant group has also lined up limited-edition national burgers (£9) and cocktails (£5).

This classic Clerkenwell gastropub has transformed its subterranean cocktail lounge into a cabana, sponsored by Havana Club Rum. Bar snacks have gone Brazilian with street food-inspired chicken coxinha and pork and bean stew on the menu. Sip a Havana Club Mojito or special Tropical Cabana Club Daiquiri while you watch England matches on the big screen. Open Wednesday-Saturday. 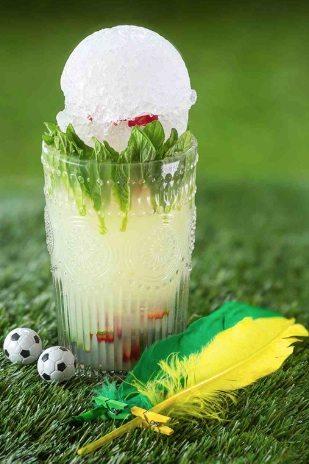 Or how about something a little different?

If you would like to host your own Brazilian-themed food fest you can pick up all the tips and tricks at this cookery course at Islington’s new ‘social food hub’. Learn how to cook Brazilian fishcakes, doughnuts, prawn skewers and fried pasties at classes taking place on 12 and 18 June at 6.30pm. There’s an introductory soft launch offer of 25 per cent off Jenius Social courses.

This Bankside spot is serving its very own slice of Rio with the World Class Beach-Bum World Cup Cocktail – a concoction made from Abelha CachaÃ§a, lime juice, agave, red-chilli, mint leaves, a splash of soda and a football-shaped ice cube. Available from 12 June-13 July.

Fancy some Brazilian cuisine in London during this World Cup? Read our round-up of the best places compiled in association with Luiz Hara (AKA The London Foodie).