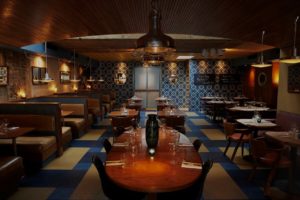 Stevie Parle has confirmed his southern Italian restaurant, Rotorino, is to close. The chef said he is going to “focus on other projects”. The exact closing date is currently unknown, though the restaurant is taking bookings until April 9. The move follows the closure of The Dock Kitchen, Parle’s first restaurant. Parle said: “I’ve been running […]

Chef Stevie Parle is providing an in-house restaurant for a luxury co-worker space in Clerkenwell that opens early next year. The FORA workspace will offer boutique hotel or members’ club-style services to clients who want a bit more than ping-pong tables and beer on tap in the communal space. The site in Central Street, Clerkenwell, is […]

We’ve teamed up with the good people of Twizoo to announce the top 5 trending restaurants on Twitter each week in London. Twizoo is an app that gives restaurant recommendations based on what people are saying on Twitter, and analyses over 50,000 incoming tweets per week to determine which restaurants are attracting the most buzz. […]

Hackney was once the domain of artists, students and Londoners looking for cheap digs. All of which seems like a distant memory now that it has become not only Hipster Central, but also a booming borough with new businesses, restaurants and bars opening at a furious pace. It used to be Broadway Market, London Fields […]

The Editors’ review of Kurobuta The prices at this ‘relaxed’ Japanese tavern aren’t very informal, but the food is ruddy good   Blanchette knows how to please Jay Rayner  The Guardian critic eschews a pricier tasting menu spot for this down-to-earth, small plates affair (which we also gave a big thumbs up to)   Lee Westcott’s […]

Stevie Parle, of Dock Kitchen fame, has opened his new restaurant in Dalston. The Kingsland Road spot will be called Rotorino (once thought to be called Sardine). Backed by The Rushmore Group (Milk & Honey and Danger of Death), this is Parle’s second restaurant, the Dock Kitchen having opened in 2009. Parle’s new venture has […]

Ex-Spuntino head chef Rachel O’Sullivan has opened a deli, Pinch Pantry, off Dalston Lane (just round the corner from Steve Parle’s new Rotorino). The former Polpo Group chef is working with Venus McMahon (formerly of local dine ’n’ wine spot, L’Entrepot).     To keep up to date with all the latest London goings-on and news […]

The Editors’ review of Q Grill  Camden’s answer to the Caprice. But who asked the question?   Grace Dent reviews London House Was Gordon Ramsay ‘sitting for a portrait dressed as a beefeater’ when he dreamt up that name?   Stevie Parle’s Rotorino to open next week In a last minute switch up his new […]