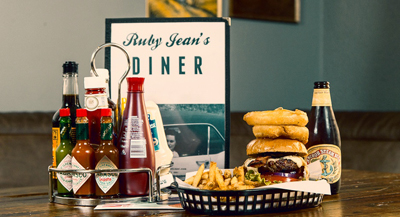 If – after recent openings like One Sixty Smokehouse, Q Grill and Avenue – you still haven’t had your fill of the cuisine du jour, you’ll be really pleased to hear a new American pop-up is coming our way. Ruby Jean’s Diner will kick off a run of residencies at The Royal George in Charing Cross Road on 9 April.

From there the pop-up will move on to Kilburn (The Earl Derby) on 10 April, Camden (The Lyttleton Arms on 14 April and The Railway (Blackheath) on 15 April and Shepherd’s Bush (Sindercombe Social) on 18 April. Sindercombe Social is a new supper venue, opening for the first time that night on the site of a former O’Neill’s pub in Goldhawk Road.