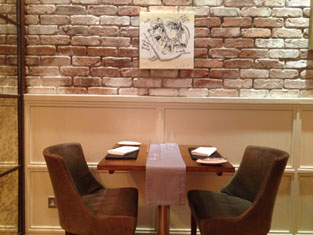 Marylebone’s Canvas, which opened six months ago, has closed and relocated to the former site of Le Cercle. Chef/restaurateur Michael Riemenschneider will relaunch the restaurant on 2 September in Wilbraham Place, just off Sloane Square.

The new Canvas will not only be bigger (60-80 covers instead of 20) and less central, it will also (crucially) be less formal. The ‘build your own tasting menu’ option will remain but customers will also be able to choose just one course if they wish. Fine dining restaurant relaxes its look and feel? Where have we heard that before?

Riemenschneider has also bought the lease on ‘restaurant-with-rooms’ the Black Boys Inn in Hurley, Berkshire. The inn has a 50-cover restaurant and eight en-suite guest rooms and is already open with Canvas sous chef Matthew Osgood heading up the kitchen.