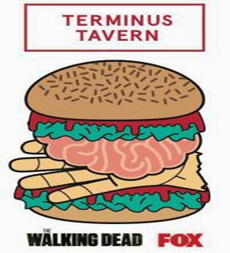 Are east London pop-ups becoming too outré in their concepts for even the hippest hipsters to stomach? This week we were brought news that Death Row Dinners (tagline: eat like it’s your last meal) in Hoxton had been cancelled because of threats against the organisers and complaints over their macabre menu design, which showed black and white mugshots of prisoners displaying their last meal wishes draped around their necks.

Now prepare yourselves for an even more outlandish idea, courtesy of Messhead – aka Miss Cakehead and London Mess Chef James Thomlinson. The duo have come up with a one-day free giveaway to promote the launch of the new TV season of The Walking Dead – handing out burgers that supposedly taste like human flesh! And how, precisely, do you research that? By studying reports from cannibals who described people as tasting like various different meats, from pork and veal to tuna.

If you think you can stomach the idea, free burgers will be available from their pop-up at the Old Truman Brewery on Brick Lane from noon on Tues 30 September. Or perhaps you might just prefer to get a life?