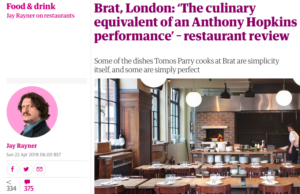 Jay Rayner in The Observer is the latest critic to fall in love with Tomos Parry’s food at Brat. The place itself is perhaps to achingly Shoreditch, but the cooking is utterly lovely…

“Show cooking may be tough, but trickier still is the seemingly effortless; the edible equivalent of, say, Anthony Hopkins’s performance in TheRemains of the Day…. Tomos Parry’s cooking at Brat is the culinary equivalent of a Hopkins performance.

“I first tried Parry’s food at Kitty Fisher’s, which for a while was the restaurant everyone talked about in hushed tones… the meal I had didn’t quite do it for me… here, in this clubbable wood-lined first-floor space in Shoreditch … it’s a revelation.

“I’m meant to be interested in Welsh heritage and Basque peasant culture, but all I care about is the end result. The night we are there, every other table seems to have ordered a whole turbot.

“The smaller turbot costs a gulp-inducing £55… It is slow-cooked over indirect heat for half an hour … The result is a soft, lightly sticky skin that seems to melt on the tongue… a meal with many high points.

“An option listed as spider crab, cabbage and fennel leaves me a little breathless… a perfect example of simplicity executed with indecent amounts of skill and good taste. Is it cheap? No. Is it good value? At £6.50 for the cockle dish and £9.50 for the spider crab, yes.

“Of course, it’s achingly Shoreditch and so staunchly Now, which is enough to put most people’s backs up. The food at Brat is both seemingly effortless and utterly lovely.” 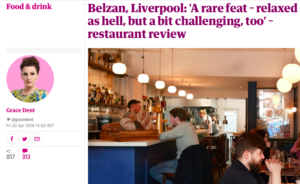 “Liverpool’s food scene – from The Art School to Mowgli and throughout the Baltic Triangle – has flourished on its own terms, not London’s… now this all-day “neo-bistro” on the Smithdown Road is doing pork collar yakitori … and it all feels wholly natural.

“…seasonal, often local produce that’s just brimming with Scouse swagger and European as well as Japanese splashes. Plentiful shareable plates. Belzan pulls off a rare thing that many restaurants try and fail to do: being relaxed as hell, but also a little challenging, too.

“The place also welcomes well-behaved dogs, of which I am 100% supportive. I can’t say that everything I ate at Belzan was perfect, or daintily plated or life-changing, but I certainly left fed and happy. There’s a lot here for vegetarians and, if you ask nicely, and with a few tweaks, for vegans, too. Sometimes people really do just want beautifully cooked, non-fussed-with veg.”

Her favourite dish was a plate of lukewarm rice pudding flavoured with tonka bean “that enhances all food with a vanilla-y, liquoricey, caramelly and clove-esque aroma” – illegal in the US as it’s toxic in larger quantities, but she can think of no better way to go…” Grace passed away in Liverpool. She was quite tipsy. She had no shoes on, had just made friends with a labrador and was halfway through eating a tonka bean rice pudding. She died happy.” 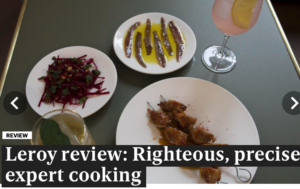 “Leroy… turns out to be a declension of Ellory, both the name and the place itself. Leroy has aimed to keep a bit of the Gallic feel with old bistro chairs and a marble bar…the odd shape remains slightly unsettling.

“…a quail skewer (£6) was perfect, little chunks of the fiddly bird neatly taken off the bone, in a honeyed, peppery marinade. Lamb sweetbreads, morels, nettle and spinach sauce (£16.50) was faultless.

“…no salt or pepper [was] provided on the table for any …impudent correction of the kitchen…all expert, precise, emphatic and not at all reminiscent of the casual Parisian bistro… that Ellory seemed to be turning towards as Leroy.

“Both in the glass and on the plate,  Leroy pursues the path of righteousness and significance…hardly ever have I felt more rectified and instructed, rather than served and indulged, than here.” 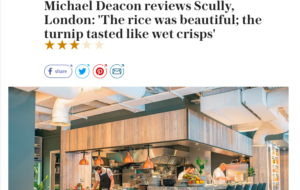 Michael Deacon in The Telegraph reviewed Scully: “The rice was beautiful; the turnip tasted like wet crisps.”

“Good evening, madam, sir. May I take a moment to explain the article? It’s a review of a restaurant. The text is written in the English language, with each word composed of a varying number of letters derived from the Roman alphabet.

“To aid comprehension, we recommend reading the words from left to right, starting with the line at the top of the page and working your way downwards to the foot of the page, moving from line to line until all the words have been read.” 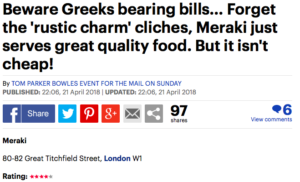 He says his knowledge of Greek food isn’t that great, but lists all the Greek literature he’s read, from Homer to Captain Corelli, just so we still know he’s very clever. Oh, and he’s visited lots (of course).

“…opened by Arjun and Peter Waney, the siblings who brought us Roka, Zuma and La Petite Maison… a long, barn-like room, with expensively rustic walls. There’s noisy, then there’s Meraki on a Wednesday night. It makes even The Wolseley seem muted.

“Deep-fried soft-shell shrimps are excellent, every bit the equal of those I ate at Toula’s in Corfu. Four charred lamb chops are up there with those Korean beauties at Roka. They bleat with deep ovine aplomb.

“Meraki is a long way from the clichéd Greek places of old, with their slimy dolmas, fluorescent pink tarama and calamari clad in bulletproof batter. The only thing smashed here is your credit card limit… the cooking can be very good indeed.

“Those in search of rustic Greek authenticity will not be amused.” 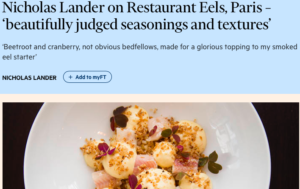 “The combination of beetroot and cranberry, not obvious bedfellows, made for a glorious pink-and-purple topping to my smoked eel starter. Together with the acidity of apple and the crunch of hazelnut, this was a stunning dish.

The other starter, grilled just-in-season white asparagus topped with melted Scamorza cheese and a vinaigrette of bergamot, was equally well conceived. We wiped our plates clean with a superior brown bread.”