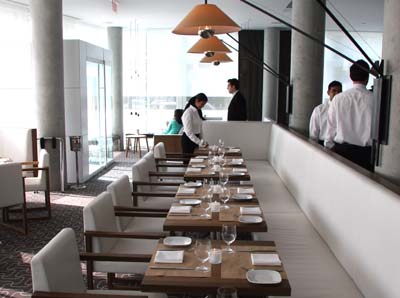 Oddly located overlooking a highway, on the edge of the West Village, the latest addition to the Jean-Georges Vongerichten empire; it offers an interesting eastern-influenced cuisine, which – at lunchtime – can be enjoyed extraordinary cheaply.

One of the great treats a leisure visitor to New York – or to London, for that matter – can enjoy is the top value offered by lunches, especially if you seek out the less obvious locations.

The setting of this latest addition to the Jean-Georges Vongerichten empire is certainly quite a surprise, as the literally correct description of its location – the West Village – doesn’t entirely prepare one for an airy ground floor of a new apartment building, whose large windows give a panoramic view of the West Side Highway.

The dining room – which felt rather like a better proportioned version of St Alban – seemed a bit odd initially, as we were the first luncher to arrive, but as the place filled up, which it largely did, it ‘worked’ surprisingly well.

For $48 all-in (including tip), we enjoyed two light and delicious courses – essentially western, but presented with a degree of eastern sensibility – as well as a splendid pudding, bread, coffee and two glasses of wine. Really nice touch: a special, short, lunchtime wine list offering wines by the glass at special prices, so you don’t destroy the whole budget-stretching virtues of a bargain set lunch menu.

Whatever the exchange rate may prove to be if one visits New York, this is a lunchtime destination well worth checking out.