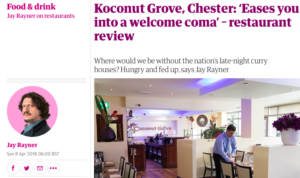 Jay Rayner in The Observer was unable to visit his original Chester target Brewery Tap because they don’t take late bookings, but finds a gem in Kokonut Grove…

“The restaurateurs, chefs and waiters running restaurants in Britain offering the food of the Indian sub continent… if you want to eat in a British restaurant after about 9.15pm outside of most major conurbations, you are utterly dependent on them… the hardest working people in the British catering business.

“Mostly, they just provide dinner after a long day recording, but sometimes, they are notable… a little gem like Chester’s Koconut Grove, a clean-lined white box of a space… specialise in the cooking of Kerala… dosas… vast friable, lacy pancakes …the ones served here are more than 2ft across.

“…masala dosa comes stuffed with soft, spiced potatoes and fried onions…. that cheery mix of crunch and soothing squish… exuberantly pungent fennel lamb curry… semiya payasam, a Keralan mix of hyper-sweetened milk thickened with vermicelli noodles, then pelted with cashews and raisins… will gently ease you into a welcome coma.

“Without Koconut Grove we would have been lost in Chester. With it, our night was complete.” 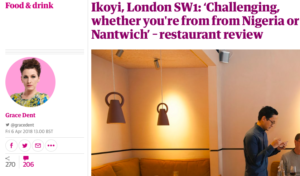 Grace Dent in The Guardian reviews one of last year’s most interesting London restaurant launches, Ikoyi, an West African-influenced fine dining venture in St James’s Market, where she tears through £200 with ease…

“Ikoyi may not be authentic, but it’s puzzlingly innovative. People who love food, or rather the food scene, have certainly taken to Ikoyi. Ikoyi would feel peculiar, challenging and unique whether you were from Nigeria or Nantwich.

“Only the hardest heart couldn’t warm to all this. We tore through £200 in less than two hours. It’s very easy to do.

“Kent mango, ogbono and buttermilk pudding is … one of the nicest things I’ve put in my mouth this year… not always delicious, certainly dear, but clearly important. If West-African cuisine is close to your heart, your boundaries will be tested beautifully.” 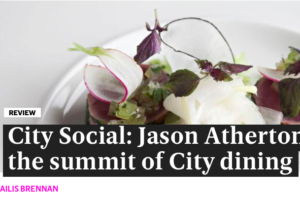 Ailis Brennan in The Evening Standard loves the views and cocktails at Jason Atherton’s vertiginous City Social, but the food doesn’t quite live up to the price tag…

“Twenty-four floors up Tower 42… award winning food with a side of some of the best views in the city… inventive and elegant cocktail list.

“… standout dish… the Orkney scallops… swayed sensuously from brothy depths to fragrant highs. I could have bathed in the stuff,.. you are hard pushed to get a main dish below £30. At that price, you’re looking for perfection, which the restaurant doesn’t quite manage.” 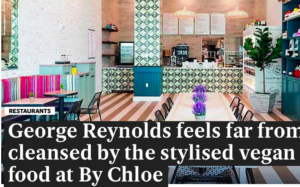 “…just the first London opening in a mini-chain that already has nine locations in four US cities. Food… made to be instagrammed “

“It was less impressive to eat. Things between bread were especially bad.

“Like the idea of serving veganified British classics in the first place, it all felt a little misguided… this is about taking something natural, putting a logo on it and mega-upselling it. It didn’t feel genuine.” 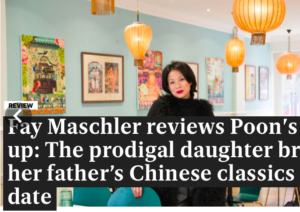 “Amy, who as a girl worked in all of the family’s establishments and was absolutely hell-bent on not going into the business, has recently opened Poon’s Pop-up in Clerkenwell.

“The premises… are spacious and light with suitable whimsical detail.

“The aim of the menu and the project is a celebration of Cantonese home cooking.

“Won tons tossed in red chilli oil should certainly be part of an order (not for you vegans though)… we had a merry time despite food that needs more work. Bill Poon is apparently acting as consultant chef and maybe he needs to crack the whip more sharply in the kitchen.” 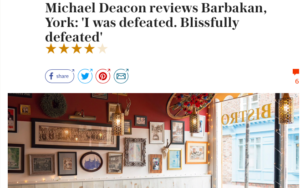 Michael Deacon in The Telegraph gives a stunning five stars to Eastern European cafe-by-day and restaurant-by-night Barbakan, York: “I was defeated. Blissfully defeated.” 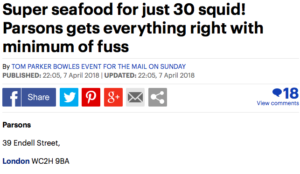 Tom Parker Bowles in The Daily Mail, hugely enjoys the fish at new(ish) Covent Garden spot Parsons, though not as much as his favourite seafood restaurant Cervejaria Ramiro (in Lisbon, of course)…

“Within months of opening, Parsons has elegantly eased into the pantheon of great London fish places, sitting alongside Scott’s, J Sheekey, Sweetings and The Oystermen.

“It has heart, and soul, and peerless piscine allure… one of those places that get everything right with the minimum of fuss and fanfare.

“… easy, unforced, no-nonsense charm… simple, unpretentious and pretty damned splendid. Space is tight, but service so charming and the atmosphere so intoxicating that you soon cease to notice the crush… intense smoked cod’s roe… ubiquitous these days, but rarely done this well.

“Trout tartare is clean, spicy and sharp, a lusty, palate-reviving reveille. At night, the lights are low and each dish made better still by a genuine warmth and belly-stirring hubbub. There’s so much more I want to try.” 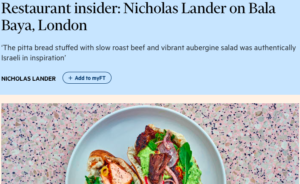 “We ate lunch on the ground floor. The pitta bread stuffed with slow roast beef and a vibrant aubergine salad was authentically Israeli in inspiration, but possibly a little too sedate to be entirely reminiscent of Tel Aviv.

“Dinner upstairs on another occasion was a more dynamic affair. We began with “pockets of semolina” — two dumplings filled with meat served in a paprika broth with chilli and cardamom — and something described as “squidelicious”, pieces of spiced squid served with sweet-corn mayonnaise and a coriander relish.”