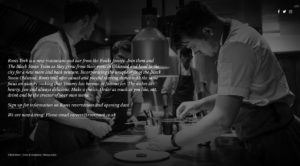 Tommy Banks, the chef behind Oldstead’s revered Black Swan (number eight on the Harden’s 100 list of the country’s best restaurants), has announced plans for a second venture called Roots in York this autumn. Banks “produces exceptional, exciting – even mind-blowing – tastes and textures, with subtlety, intensity, and integrity” at Black Swan, which is “well worth the long drive!” down a single-track lane, on the fringe of the North Yorks Moors. So news of a sister restaurant is very exciting indeed.

Roots sounds like it will be a slightly less formal affair with an à la carte menu of sharing dishes (some of which will be similar to those on the Black Swan’s tasting menu). Like the Black Swan, produce for the Roots menu will come from the family farm, however Banks stresses it will have its own identity. Unlike its sibling, Roots will not have rooms, but it will serve lunch. Banks says he will split his time between the two kitchens, working in York during the day and Oldstead in the evenings.

Banks told Caterer: “This is something I’ve been wanting to do for a long time, it’s just been about the right time and place. The second restaurant is a long time in the planning, so we’ve got people in place who are stepping up at the Black Swan, some people are going across to Roots, everything’s very well planned. I don’t feel I’ve bitten off more than I can chew… It’s the right time to expand.”