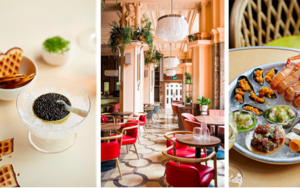 Brett Redman (Elliot’s, Jidori), and stylist-turned-restaurateur Margaret Crow, have announced their latest joint venture Neptune will open within Bloomsbury’s new 334-room Principal London hotel on 24 May. The neighbourhood restaurant, one of three dining options within the dramatic listed building on the eastern flank of Russell Square, aims to create a ‘Bloomsbury Salon’ for the 21st century. Previously the duo launch The Richmond in Hackney together (now RIP) which was much-loved among our reporters for its oyster happy hour and brilliant raw bar.

Neptune boasts a 102-cover dining room and 30-seater bar which evokes the spirit of the Hackney restaurant, bringing together Brett’s cooking with Margaret’s warm style and hospitality. They have created a completely new seafood-focused menu, based around an informal approach to the classic oyster bar as well as featuring Brett’s signature wood-fired cooking in the extensive à la carte menu.

The oyster bar located the centre of Neptune’s dining room will serve a variety of oysters and shellfish selected from independent growers around the UK. Diners will be able to order towering seafood platters that evolve with the seasons, featuring classic chilled and raw dishes, all spiked with diverse flavours. Examples include: Wild Cornish mussels with a saffron, orange & bay leaf soffrito; Steamed chowder clams with buttermilk dressing & dill granite; and Dived scallop carpaccio with ajo blanc & nori.

Alongside this, large sharing dishes will feature on the menu, including their signature steamed-to-order ‘Whole Cornish crab with house spaghetti in a smoked Datterini tomato, Vietnamese basil and long pepper sauce’. Diners can also expect a modern-style British caviar service that swaps out traditional blinis for freshly made potato waffles and sour cream for house-cultured jersey cream, using caviar sourced from the team’s trusted suppliers in Devon.

The bar programme will feature fresh cocktails best paired with oysters and shellfish, including the ‘Green Martian’ a cucumber and absinthe daquiri, as well as lighter takes on classic drinks, such as the ‘Light Side of the Moon’ a gin-based sazerac.

Neptune’s extensive wine list comprised from small-scale, quality producers, is curated by Isabelle Legeron MW, the world’s foremost authority on natural and low-intervention wines. There is a large selection of grower champagnes to pair with raw dishes, as well as a section dedicated to what Neptune calls ‘Island Wines’: fresh, mineral and saline wines from regions such as Corsica, Santorini, Tenerife, Sardinia and Sicily. Classics appear on the list next to less common grape varieties, but Neptune’s approach to wine always mirrors their approach to food: low-intervention and terroir-focussed.