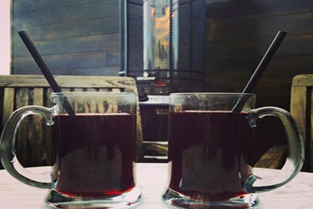 The sheer number of chalet themed pop-ups opening this month has confirmed something that we at Harden’s have long suspected. Not only do you not have to ski to enjoy the après part – you don’t even need to be anywhere near a chair lift, a funicular or an Alp. Here are some of the best places to enjoy the après ski atmosphere this winter without ever leaving London… 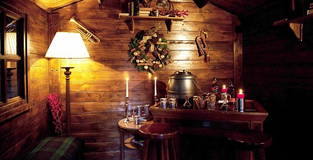 Or for something a little more ‘off the beaten track’ why not head to Balham? (See, we weren’t kidding). The Lodge is a three month-long al-fresco (and heated) pop-up, brought to us by supperclub supremo Jimmy Garcia. Located just moments from Balham tube station, it’s worth checking out for the décor alone which includes vintages skis, taxidermy and plenty of tartan blankets.The food sounds hearty if perhaps not ultra-authentic – truffled mac and cheese; wild boar sausages; venison burgers and fondues blending artisan cheeses (courtesy of Neal’s Yard) with white wine and kirsch. To drink there’s Baked Alaska buttered rum, Andean mulled wine and Jamaican hot toddies.

At the other end of the pop-up spectrum is a winter wonderland perched atop one of Knightsbridge’s premier hotels. If you prefer your warming blankets to be Moncler, your chalet-inspired cabins hand-carved and your après ski aperitif is champagne – then the Berkeley rooftop is the place for you. It includes a pine-lined, private cinema with just six seats, where you and your guests can watch classic Christmas films like Miracle on 34th Street (RIP Sir Richard Attenborough, hands down the best Santa ever) and It’s a Wonderful Life.

Perfect for a small festive gathering of family and friends, the Winter Cabin pop-up at this Ramsay-run 18th century coaching inn seats just 12 people. Dine in the cosy (heated) courtyard at the York & Albany near Regent’s Park and enjoy a selection of warming drinks like buttered rum, hot chocolate with marshmallows, caper and spiced mulled wine and hot apple cider. The menu includes wild boar burgers, black pudding scotch eggs and venison meatballs, and for dessert you get to toast your own marshmallows.

Or, if you want to do the après ski thing the way the Sloane set do, Archer Street bar in Soho is attempting to emulate some of their favourite winter haunts with an Alpine themed club. Piste is apparently inspired by the best of Aspen, St. Anton, Val D’Isere, Verbier and St. Moritz. Although we thing you’d hard pressed to transpose the essence of these ultra-affluent ski towns into the sleazy heart of Soho, they’ve certainly had a go with themed cocktails, fancy dress, live music and DJs. 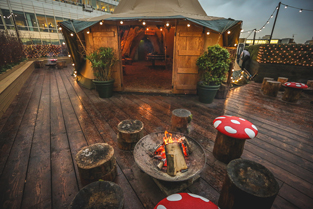 More al fresco winter fun as this Narnia-inflected pop-up arrives on a Shoreditch rooftop. Woodlandia may be trying to bring a touch of ‘Britain’s enchanted wintery woodlands’ to the city with pine trees and mossy tree stumps, but its offering sounds very civilised. Hearty meals from the barbecue are served by candlelight, accompanied by cocktails, hot buttered rum and the ‘Mary Berry’: a forage-inspired, gin-based Bloody Mary.

Departing London’s pop-up scene there’s still plenty of après ski action to be had. How about Bodo’s Schloss in Kensington? Named after Bodo’s Cafezelt, the oldest tent at Munich’’s Oktoberfest and Schloss, this restaurant bar and disco concept offers fondue nights where guests can enjoy cheese and chocolate fondues, alongside other Alpine classics, such as chicken or veal Schnitzel, NÃ¼renberger sausages and Sauerkraut. 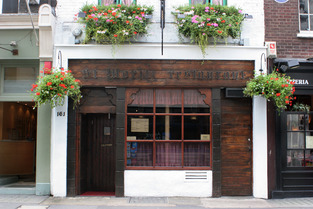 Or there’s always London’s oldest Swiss restaurant, est 1974. “A “kitsch” Swiss-chalet-style Soho veteran, long popular for its “friendly old-school” service and “quality” fondues (plus “excellent game in season”); unusually, however, there were a couple of “really disappointing” reports this year – hopefully a blip.