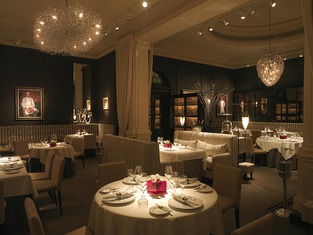 Mark Twain may have thought that golf “spoiled a good walk” but when it comes to selling a multi-million pound hotel the sport is apparently a great advertisement. Ever since Gleneagles in Auchterarder hosted the Ryder Cup last year its owners Diageo have received “numerous expressions of interest” from parties looking to purchase the place – and now an offer from the Hoxton hotel group has been accepted.

Diageo tried to sell the Perthshire hotel (which houses Andrew Fairlie’s “truly outstanding”, and “frighteningly expensive”, dining room) once before in 1998 for £100 million. However it is thought the Gleneagles price tag is now more than £200 million. Private investment and property company Ennismore (which owns Hoxton hotels) is believed to have outbid rivals, including KSL Capital Partners, owner of the Belfry, to secure the property.

Gleneagles, which recently celebrated its 90th anniversary, has been under Diageo’s ownership since 1984, three years after it was sold by British Rail to a consortium of British businessmen for £10 million (a total bargain by today’s standards!).

Ennismore will retain the existing Gleneagles management and workforce, headed by managing director Bernard Murphy, while investing a significant figure across the 850-acre estate comprising three golf courses, Restaurant Andrew Fairlie, and a Spa by Espa.