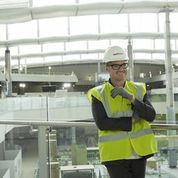 Remember the days when all airports had to offer in the dining department was Burger King? Maybe a café serving sandwiches and what might be considered coffee, if you were lucky. Well now, in the steps of Gordon Ramsay, Mr Molecular Gastronomy himself, Heston Blumenthal, has launched an outpost at Heathrow Terminal 2. The Perfectionist’s Café is now open at Heathrow’s redeveloped wing, known as The Queen’s Terminal.

The cuisine reflects travellers’ time constraints, comprising classic fast food like burgers, fish and chips and pizza, from what’s claimed to be the first ever (hold the front page) wood burning stove in an airport. This menu has, apparently, been in development for the last year and a half under Ashley Palmer-Watts (of Dinner at the Mandarin Oriental) and Julian O’Neill (The Fat Duck Group).

Quite how it takes a year and a half to evolve a menu mainly composed of classic fast food is not entirely clear.