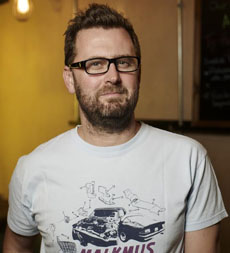 Pop-up-goes-permanent – it’s a familiar story these days. But what about ‘permanent-restaurant-not-opening-on-schedule-launches-pop-up-to-keep-its-dream-alive’? Granted, it’s not quite as catchy, but it transpires that that is indeed why chef Scott Hallsworth decided to open a temporary version of his Japanese izakaya (pub), Kurobuta, in October last year.

It turns out that before Kurobuta’s arrival last week at its fixed premises near Marble Arch (Connaught Village as it is affectionately referred to by estate agents), the restaurant was in some danger of never opening at all, as it was put far behind schedule by a combination of planning and investment issues.

So what to do? Aussie-born Hallsworth, an ex Nobu head chef, decided to take matters into his own hands and get some grassroots, on-the-ground support for the Kurobuta idea. “And yes, make some money and keep the project afloat in the process,” he tells Harden’s.

Hallsworth says: “The whole reason why I wanted to open Kurobuta was because I was disgruntled with the top end Japanese market in London. And, of course, I wanted to do something for myself – my own restaurant, my own concept. The idea that it might not happen? Well, there was just no way that I was going to allow that. The pop-up was the best thing I have ever done. It helped keep the project afloat, but it was also an opportunity to test out the concept. It gave Kurobuta a massive kickstart and even won us another investor in the form of Paul Kovenesky, a restaurateur and hotelier in Cape Town.” 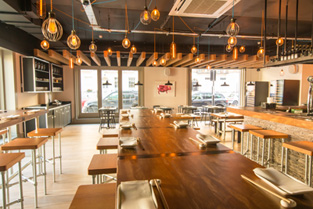 Hallsworth hopes the informal atmosphere and service at his izakaya will make it a dining destination for the mid-market – diners that he believes aren’t being catered for by the city’s current Japanese establishments. Places like Nobu and Roka are the playgrounds of the rich, while Wagamama and YO! Sushi appeal to the masses. Hallsworth and his team wanted to create a Japanese restaurant that would attract those with a bit of money to spend, but not necessarily Russian oligarch lucre.

“The mid market is probably the most sizable in the UK, so it’s surprising no-one has done it before,” he adds.

Hallsworth’s love of Japanese and Asian food started from an early age, growing up in Western Australia. Because of the country’s global position, Australia has a lot of Asian immigrants, which has had a huge impact on cuisine. “When I was growing up it was normal to eat sushi at home and cook using Asian spices and herbs. It’s inherent in our culture now,” he explains.

Kurobuta, now open at both its permanent Kendal Street site and at the King’s Road pop-up, has been designed by Hallsworth as a scalable concept. He hopes to roll-out more restaurants in the future and says he already has several parties interested in investing.

And what did we think? You can read our Kurobuta review here.