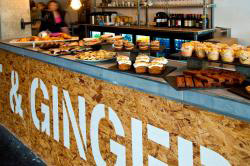 Foxcroft & Ginger, Soho, launches its second outpost, in Whitechapel, today (3 April). The new 70-cover restaurant occupies the former site of Wickham’s department store in Mile End Road, which – as all readers will doubtless know – was once regarded as the ‘Harrod’s of the East’.

Foxcroft & Ginger’s new operation includes a 24-hour take-away bakery operation, so punters can take home one of the ‘secret recipe’ sourdoughs, as well as enjoying them in-house. The restaurant also serves a range of sourdough pizzas, baked goods and cakes.