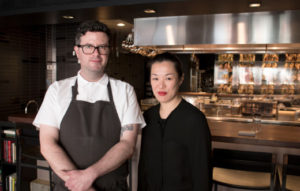 This April, James Lowe’s spartan Shoreditch restaurant Lyle’s – “a pioneer in the new world of London restaurants and the UK scene generally” – will fly over Sean Gray and Su Wong Ruiz of Momofuku Ko in NYC. The trio will host two dinners at Lyle’s on Tuesday 24 and Wednesday 25 April. Executive chef Sean will team up with James and his team to create two one-off menus, and John Ogier will be joined by front-of-house superstar Su Wong Ruiz, general manager of Ko.

Ko is the flagship fine-dining restaurant of David Chang’s Momofuku group, which originated with NYC ramen spot Noodle Bar in 2004.

The menu won’t be announced until the day of the event, but guests have been told to expect some Momofuku Ko classics on the menu, including: sea urchin, chickpea and hozon (a Momofuku proprietary seasoning made from fermented nuts, grains, or seeds); razor clams, pineapple and basil; wild rice kombu; and Ko egg and caviar.

There will also be a special drinks list created by Su to complement each evening’s menus. Tickets are £77 pp, excluding drinks and service, and are available to purchase via Lyle’s website.