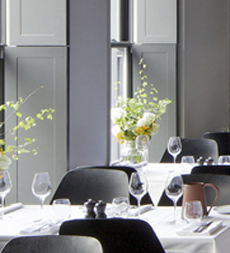 Soho hotel and restaurant One Leicester Street (formerly St John Chinatown) has been sold for the second time in just two years. The seemingly problematic site, once part of the legendary St John group, went into administration in 2013 but was rescued at the eleventh hour by Loh Lik Peng of the Unlisted Collection, which also owns Bethnal Green Town Hall hotel.

Now the hotelier has announced that he too has sold the premises on, this time to Honky Tonk – an American-style restaurant group that owns diners in Clapham and Chelsea.

Historically the 15 bedroom hotel’s dining room was the home of Manzi’s (RIP), a beloved fish restaurant, that closed back in 2012. Since then new owners have not had much luck replicating the same kind of devotion that Manzi’s eccentric service and gingham tables cloths always seemed to inspire. A West End St John outpost was initially a welcome addition, but our reporters quickly noted that it was a “cramped” place with “cold” décor, and “for such simple cooking” it could seem “a bit overpriced”.

When it changed hands and reopened as One Leicester Street, the kitchen was headed up by Tom Harris, however he left the hotel earlier this year and a pop-up style supperclub masterminded by ex-Viajante chef Leandro Carreira was run in the dining room until June. At the moment there is no ‘named’ chef running the show at the hotel.

Both hotel and restaurant will continue to operate as usual and will be relaunched by Honky Tonk at the end 2014. Although they currently operate two restaurants, the group has confirmed that they will be keeping the hotel rooms on, as well as relaunching the bar and dining room.