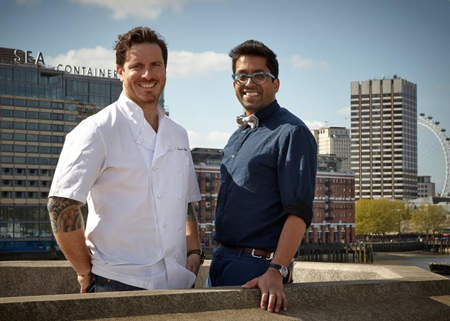 Fay is back from her hols, and she’s brought some mystic powers

The Standard’s critic upgrades the Mondrian’s Sea Containers restaurant to 3* on the basis that improvement is “practically certain”.

Quaglino’s to reopen after major refurb

D&D will unveil the restaurant’s much-needed new look on 17 October.

Grace Dent finds a pleasant surprise at Pond in Dalston

“It sounds like a damp space brimming with frogs”, but turned out to be one of the reviewer’s favourite dinners of 2014.

From white truffles at Pollen St Social to the views from Oblix at The Shard, here’s what’s trending on Twitter.

As one door closes…

His eponymous London restaurant is gone (and the site still vacant, when we last looked) but Tom Aikens is to open The Pawn in Hong Kong.

Book now for the Caterer Summit

Yet another Russian-backed import is to open right in the affluent heart of London.

The full list of JKS Restaurants' new delivery operations
Three more restaurant meal kits for lockdown and beyond
'No plans' to extend business VAT cut despite hospitality warnings
Rent moratorium extended - it will probably need to be again
Share this article:
Facebook
Twitter
Join the Community
Join for Free