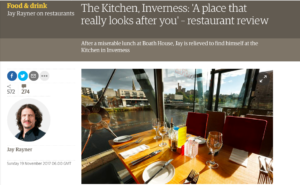 Jay Rayner in The Observer reviews The Kitchen, Inverness (after a bad meal at Boath House, Nairn)… BOATH HOUSE: “I’ve had more fun at the chiropodist, getting my corns removed. I left the Boath House with my will sapped. It is a brilliant opportunity wasted. “A narrow, gummy strip of treacle-cured salmon arrives, with cubes of bitter, […]

Gary Usher, the king of Kickstarter chefs, is chasing his third round of crowdfunding to launch the fourth restaurant of his northwestern empire – with fellow chefs led by Tom Kerridge (pictured) rallying to help. Usher needs pledges totalling £200,000 – significantly more than in his first two campaigns – by June 8 in order to proceed with his planned restaurant Wreckfish in Liverpool. […]

Leeds chef Michael O’Hare has released further details of the three restaurants he is opening in Manchester with former footballers Ryan Giggs and Gary Neville – including their typically extravagant names. The Man Who Fell to Earth, a “formal Parisian ballroom-style” venue, and the more casual Are Friends Electric will be housed in the boutique […]

Distinguished chefs from as far away as China, Japan and Australia will line up alongside stars from Europe and closer to home at Obsession, the two-week gastro-festival hosted by Northcote restaurant and hotel in Lancashire early next year. Now in its 17th year, Obsession runs for 17 successive nights from Friday January 20. Tickets tend […]

â¦¿ The Observer’s Jay Rayner reviewed the Bull & Ram in Ballynahinch, Co. Down, which opened in a Grade 1-listed former butcher’s shop in June and excels in “tear-inducingly bloody lovely” cuts of Northern Irish short horn beef. “They know what they’re doing here. And what they’re doing is an utter joy.  “The beef and the pork are […]

Michael O’Hare, the chef behind The Man Behind the Curtain, which has drawn a capacity crowd of foodies to Leeds since opening two years ago, has been signed up to launch a new restaurant at the National Football Museum in Manchester later this year. The Rabbit in the Moon, named after an Asian folk tale, […]

The Sunday Times’s AA Gill revisits Damien Hirst’s Pharmacy in its new form as Pharmacy 2 in Vauxhall and finds things have changed considerably since the Notting Hill original launched in 1998, when the opening was ‘like a red-carpet premiere, a mob of paparazzi and rubberneckers, double-parked limos, teeth and tits’. “I was surprised at […]