One of London’s best all-rounders

“More like the Elysian fields!”: Taylor Bonnyman’s “congenial” but “unpretentious” Chelsea HQ (founded in 2013) doesn’t court publicity, but emerged with the survey’s highest food rating this year. With its “sophisticated” interior, “spectacular wine list” and “wonderful” service – “impeccably timed, professional, yet warm” – it’s long been hailed as an “outstanding all-rounder”. But it has hit a particularly impressive and consistent culinary stride in recent times, with not a single negative report received this year (and we received many reports). Head chef, Marguerite Keogh “strives for perfection, and the care and attention to detail of ingredients processed and plated is second to none”, delivering “divinely flavoured dishes” in a mould that’s “classic in style, but very modern in execution” – “witty and inventive, without being up itself or over-fussy”. Much of the produce is sourced from the restaurant’s own garden in East Sussex. Choose at lunch or dinner from a prix fixe three-course menu or alternative tasting option.

“More like the Elysian fields!”: Taylor Bonnyman’s “congenial” but “unpretentious” Chelsea HQ (founded in 2013) doesn’t court publicity, but emerged with the survey’s highest food rating this year. With its “sophisticated” interior, “spectacular wine list” and “wonderful” service – “impeccably timed, professional, yet warm” – it’s long been hailed as an “outstanding all-rounder”. But it has hit a particularly impressive and consistent culinary stride in recent times, with not a single negative report received this year (and we received many reports). Head chef, Marguerite Keogh “strives for perfection, and the care and attention to detail of ingredients processed and plated is second to none”, delivering “divinely flavoured dishes” in a mould that’s “classic in style, but very modern in execution” – “witty and inventive, without being up itself or over-fussy”. Much of the produce is sourced from the restaurant’s own garden in East Sussex. Choose at lunch or dinner from a prix fixe three-course menu or alternative tasting option.

“Fabulous on all levels” – Taylor Bonnyman’s “utterly exceptional” dining room, “hidden in the heart of Chelsea” provides “not only a real treat, but a genuinely interesting gastronomic experience”. “Beautifully crafted, creative food combinations are served with professional yet genuine charm” in “such a beautiful space”. “It’s difficult to find any fault” – if you tried hard you might say that the “decor is a bit ‘posh restaurant’”.

£89
££££
5
Exceptional
5
Exceptional
4
Very Good
* Based on a three course dinner, half a bottle of wine, coffee, cover charge, service and VAT.

“The Elysian Fields?” – Taylor Bonnyman’s “graceful and intimate dining room”, tucked away in Chelsea offers an “exemplary experience”, which for all-round quality and consistency has few rivals in the capital. “Phenomenal cooking” – from either the prix fixe or tasting menu – is delivered by “faultless, thoroughly attentive yet unpretentious” staff and “a contented buzz in the room ensures the ambience is never hushed”.

Have you eaten at The Five Fields?

A native Londoner, Taylor Bonnyman's cooking encapsulates the spirit of the capital. With a foundation built on British produce and seasonality, the cooking incorporates influences from London's broad cultural complexion and outward-looking philosophy.

Taking inspiration from the seasons, dishes reflect the aesthetics of nature and are a snapshot of the current landscape while the design of the dining room has taken inspiration from the original green fields between Chelsea and Knightsbridge where once there was open space and fresh produce taken in to London.

Service is delivered with aplomb by a team as warm and welcoming as they are professional and knowledgeable. 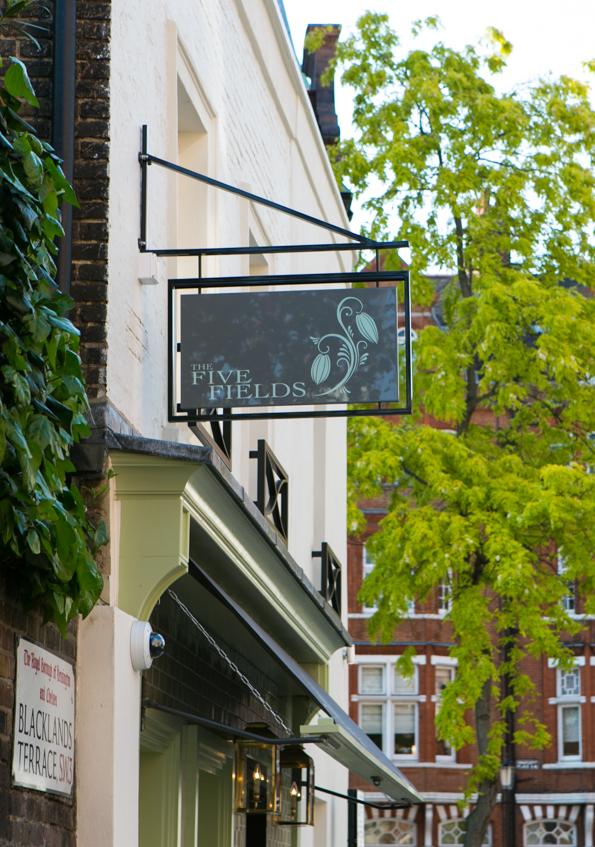 Named after John Rocque, an 18th century cartographer whose wonderfully detailed panels offer a glimpse of Georgian London where this area is referred to as â€œThe Five Fieldsâ€; The Rocque Room can accommodate up to 10 guests for Lunch or Dinner.

Located on the first floor of the restaurant and overlooking the charming side streets of Chelsea, The Rocque Room is decorated in warm subtle tones and offers a view into our extensive Wine Cellar as well as a feature fire place.

Guests may choose between two of the Chefâ€™s set menus, which are offered along with a number of additional indulgences including canapÃ©s, amuse-bouche, tea, coffee and petit fours.

A cosy lounge adjoins The Rocque Room and is available for drinks to welcome your guests before dining or after your meal.

For enquiries into booking an event in The Rocque Room please ring 020 7838 1082 or email Ceri@fivefieldsrestaurant.com.

"Amazing dinner with perfect service in a lovely setting. Always a winner in my books!"

Lloyd S
When I was looking for somewhere special to...
Reviewed 7 months, 15 days ago

"When I was looking for somewhere special to celebrate my birthday I didn't have to think that hard about it. The reason is that whenever you visit the Five Fields you are always guaranteed an excellent dining experience with amazing food , wine and service. Well after our visit on saturday I think it's safe to say the standard has risen even higher. After a nice stroll along the Kings Road we turned into Blacklands Terrace as this where you will find the restaurant. On entering we were greeted by Lourdes who delightfully welcomed us back before escorting us to our table. This was in the far right corner giving you a nice view of the whole restaurant. You really do feel so comfortable when you visit here as it's just like your dining out at a friends house. We did notice like other restaurants that they had to in order to create plenty of space between tables lost some covers. The majority of the staff chose not to wear face masks or shields and the couple that did was down to a personal decision. You also noticed that whenever a member of staff touched anything they immediately sanitised there hands. So now let's move on as we were greeted by sommelier Agnieska who it was a pleasure to see again. She poured us a complimentary and celebratory glass of champagne to welcome us back. It was then time for manager Jason to introduce himself and also to say it was good to see us again before discussing the menus situation. This was a choice of two Tasting Menus a six course or by adding a couple of supplement dishes to make an eight course menu which is what our decision turned out to be. It was then time to choose some wine to pair with the food and sommelier Agnieska came up with a few excellent suggestions in particular the one she highly recommended a South African Chenin Blanc from the Mullineux Vineyard that with it's versatility matched amazingly with the first half of the menu. While enjoying our champagne we enjoyed some delightful snacks to start us off. A tomato based cone and a tzatziki style tartlet topped with caviar. This was followed by the Amuse Bouche a stunning vegetable broth with lamb. Now it was time for the menu to begin. The wine was poured and we were ready for our first course and what a fantastic way to start Shiso with blackberry & oyster that was amazing and who would have thought oyster and blackberry would go together but this is a fabulous combination. We followed this with the Beetroot with cherry & foie gras that again was bursting with flavour and yet for a foie gras dish was quite light and refreshing on the palate. Next to arrive was the first of our supplement dishes the Tomato with red mullet & beans. This was a very clever dish and served in two parts where you first taste the richness of the red mullet & beans before your palate is refreshed with the tomato. This led us to the next course of Girolles with brill & chicken which was also served in separate bowls as the full flavour of the egg yolk and mushrooms was delightfully lightened by the brill. Our next dish was the second supplement course and personally my dish of the day it was absolutely stunning. The Grouse with carrot & offal was full of rich and amazing flavour that left you in food heaven. Before the next course it was time to put Agnieska to the test again as we asked her to pair us two different styles of red wine to compliment the amazing Fallow Deer with courgette & blueberry that was another very interesting combination of flavours that once again worked perfectly. The wines she chose were both excellent. I was so pleased as the wine she picked for me was a fabulous big and bold Italian Barolo from Diego Conterno and for my wife a Syrah from the Gramercy Cellars in Washington. Next to come was a fabulous pre dessert of Elderflower with cherry and a woodruff ice cream and yes another delightful combination of flavours that gelled perfectly together especially the fizz from the elderflower. This led us to the last course our dessert of Fig Leaf with gooseberry & sheep's yoghurt and needless to say it was delicious as was the sweet wine chosen by Agnieska. She once again pulled another beauty out of the bag with this fantastic Domaine de Souch Jurancon. I also received a nice little birthday surprise from the chefs. We finished with tea , coffee & petit fours to bring to and end an outstanding celebratory lunch. This was without doubt our best visit to date that leaves me with great anticipation to return as soon as possible. Thank You to chefs for the simply outstanding food full of amazing flavour and interesting combinations. To Agnieska for her excellent wine pairings that truly complimented the food perfectly. To Manager Jason and Chef de Rang Lourdes for their amazing personal service. This really is a restaurant that needs to be placed very highly on anyone's dining list and I for one can't wait to visit again soon. Thank You all for a fantastic birthday treat and wish you all the best in the difficult times we're experiencing at the moment #SupportHospitality"