All reviews are compiled from survey comments and ratings, without any regard for our own personal opinions, except in cases where restaurants are too new to have been included in the survey. If you want the editors’ view on new restaurants in London you can find them in our Editors’ Review section.
Explore Harden's - The restaurant guide created by you for you
Blog
Shop
About
Contact
Login
RestaurantsWorcestershireBucklandWR12

“A first class experience from the warm welcome on arrival” – this Relais & Châteaux country house hotel is the epitome of a traditional Cotswolds destination and “very efficiently run, but in a very charming and stylish way”. William Guthrie and his team deliver “wonderful” updated cuisine, be it from the three-course menu for £70, or the hardly more expensive seven-course taster option for £80. This is also a splendid choice for afternoon tea: “a little piece of calm luxury”.

£99
££££
5
Exceptional
4
Very Good
5
Exceptional
* Based on a three course dinner, half a bottle of wine, coffee, cover charge, service and VAT.

“Top-end fine dining by long serving chef William Guthrie” helps distinguish the dining room of this “dream of a Cotswold Manor House Hotel in a gloriously isolated setting” (a Relais & Châteaux property). Both lunch and dinner have à la carte and tasting options: “splash out on the accompanying wine flight and you will remember the experience long after you forget the cost!”

£99
££££
5
Exceptional
4
Very Good
5
Exceptional
* Based on a three course dinner, half a bottle of wine, coffee, cover charge, service and VAT.

“Each plate a mini work of art and ingredients from local suppliers” (main in the neighbouring Vale of Evesham) won stellar marks this year for William Guthrie’s cuisine at this “gorgeous”, small country house hotel – a Relais & Châteaux property – where “standards have steadily improved under Brownsword’s ownership”.

Have you eaten at Buckland Manor?

Head Chef, William Guthrie and his team of talented chefs work tirelessly to create mouthwatering menus that are English at their core and stay true to location, whilst remaining innovative and modern.

Menus feature fresh local produce from the neighbouring Vale of Evesham, affectionately known as the market garden of England. Fresh herbs are grown in the Manor’s own grounds and, as you would expect in a house of this heritage, there is a magnificent wine cellar. 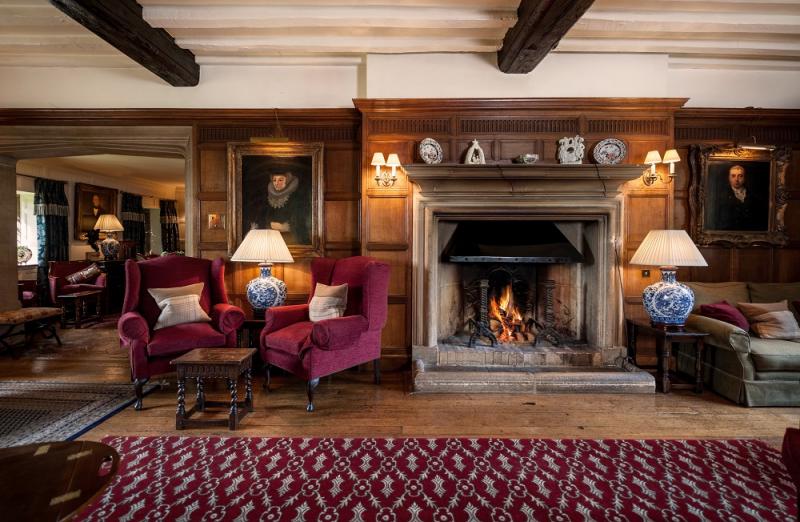 William Guthrie started his career at the age of 17 in Llangoed Hall, Wales working his way through the ranks before joining Castle House in Hereford followed by sister restaurant, La Rive.

After successful times in Hereford, new adventures beckoned and he spent time working on private yachts around the Greek Islands. At age 22 he returned to the UK and joined Mallory Court in Leamington Spa as Junior Sous Chef under the supervision of Simon Haigh. Over the next five years not only did he achieve the position of Head Chef of the restaurant but also helped the hotel gain a Michelin Star and three rosettes.

He left Mallory Court to pursue a new challenge, the design and opening of a restaurant with 10 rooms in Wiltshire, at the age of 27. Within 18 months of opening, the restaurant was awarded five gold stars by the AA, and was also placed in the top 100 restaurants in the UK. Following this, he moved back to the Cotswolds to become the Chef Director at the Churchill Arms, Paxford where he worked for three years to gain Michelin recognition and see the establishment become the only two-rosette pub in the north Cotswolds.

William has been at the helm of the kitchen at Buckland Manor since 2011 and during that time has put Buckland Manor back on the culinary map achieving three AA rosettes in 2014 and retaining them since.

The 10pm hospitality curfew is an incredibly stupid idea, according to chefs