“Flying the flag for Philippine cuisine in the UK” – this “pioneering” Kensington fixture (owned by the grandchildren of a famous general) “was one of a handful of Filippino places when it opened” and its “consistently good” cooking and striking interior design has made it a good culinary ambassador, showcasing heirloom dishes from within the founding family. They also have three cafés under the same brand in the Philippines.

“Personal service from a family-owned business” adds to the appeal of this Kensington fixture (owned by the grandchildren of a famous general), whose menu offers a good introduction to Filipino cuisine.

“Beating Jollibee if you want to try decent, quality Filipino food” – this London outlet of a Philippines-based chain (owned by the grandchildren of a famous general) operates on a different level than its fast-food rival in nearby Earl’s Court (see also Jollibee). Offering “very fresh” and interesting dishes (for newbies, “there’s a strong whiff of Thai cuisine”), “enthusiasm is key, and the food is presented with great bravura”.

“Beating Jollibee if you want to try decent, quality Filipino food” – this London outlet of a Philippines-based chain (owned by the grandchildren of a famous general) operates on a different level than its fast-food rival in nearby Earl’s Court (see also Jollibee). Offering “very fresh” and interesting dishes (for newbies, “there’s a strong whiff of Thai cuisine”), “enthusiasm is key, and the food is presented with great bravura”.

Have you eaten at Romulo Café?

Romulo Cafe brings food lovers a taste of the Philippines, in the heart of Kensington. We opened the restaurant in 2016 as the first international outpost of my family's successful restaurant business in Manila. Since then, it has been a joy to welcome all those eager to discover what Filipino food is all about.

Filipino cuisine is a spirited combination of Spanish, Chinese, Malay and American influences, the legacy of the Philippines' rich history and colonial past. Such a wide canvas invites creativity and imagination, and when it comes to preparing the Filipinos' favourite dishes, cooks will often place an accent on distinct regional traditions, unique family styles, personal experiences and more. Romulo Cafe is no exception. A tribute to my grandparents, General Carlos P. Romulo and Virginia Llamas-Romulo, our menu offers many of the dishes that my sister, cousins and I enjoyed growing up in our family home in Manila.

We hope that those who taste Filipino food for the first time at Romulo Cafe enjoy it enough to return, as our menu is quite extensive and changes regularly. And for Filipinos living in London or merely passing through, we hope that Head Chef Lorenzo Maderas' delightful interpretations of our family's heirloom recipes continue to bring comfort, pride and a taste of home. 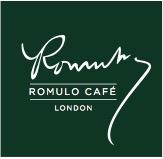 Classically trained Chef Jeremy was born in Quezon City, Philippines. He brings to Romulo Café a wealth of experience in some of the hospitality industry's top kitchens, having worked in 5-star hotels and fine dining restaurants.

Moving to the UK with his parents, he attended Croydon College before receiving an HND in Culinary Arts (Hospitality and Institutional Management) from Blackpool and the Fylde College. He began his training with the Hilton, and studied briefly in France as part of an EU exchange programme.

In 2000, he joined Simpson's-in-the-Strand in London, working his way up from commis to chef de partie. After, he travelled the world on a working holiday visa, landing a stage with Tetsuya Wakuda in Sydney. Back in London, he spent 18 months in Le Gavroche, Mayfair, working under Michel Roux Jr, before promotion to sous chef at Walbrook Club, and to Executive Chef a few months later. His next post was at Albert Roux's Brasserie Roux at Sofitel St James.

Chef Jeremy then joined Tony Tobin's La Poste in Banstead as head chef for a year before sailing with Holland and American cruises. Returning to dry ground, he was recruited by Nico Laridan to join Le Boudin Blanc in Mayfair, starting as a sous chef in 2010 and rising to Executive Chef in 2017. He joined Romulo Café in Spring 2018.

We will happily create bespoke menus to meet your requirements, from tasting to set menus, and also a wide variety of Filipino-style canapes. And we have a brilliant array of Philippine-inspired cocktails to help kick-start a party!